Most vessels voyaging the world’s oceans at this moment in time are wasting energy, no matter how sophisticated the machinery on board, and inadequacies in the overall management of vessel speed and fuel consumption are to blame.

Think of a cyclist competing in a race in the Alps; rarely would you see these athletes trying to maintain the same speed both uphill and downhill. If they did, they would quickly run out of energy climbing the mountain and that strategy would be illogical. However, this strategy is often adopted as the norm for ship operation.

Usually, a vessel is given a speed or RPM order which it maintains throughout any changing conditions along its route, with the result being varying power and wasted energy. Of course, unlike the cyclist competing in the Alps race, a commercial vessel is rarely engaged in a competitive race to the finish. Instead, a vessel is usually working towards achieving a specified estimated time of arrival. 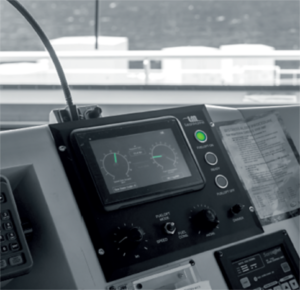 To achieve optimal fuel consumption, keeping a real time eye on the vessel’s output power and adjusting propulsive parameters according to the vessel’s specific best practice of operation is required throughout a voyage.

To achieve optimal fuel consumption, keeping a real time eye on the vessel’s output power and adjusting propulsive parameters according to the vessel’s specific best practice of operation is required throughout a voyage.

The operation of a vessel equipped with a controllable pitch propeller can present much wasted energy. These vessels typically run on afixed propeller RPM and let the angle (pitch) of the propeller blades dictate the propulsive power, or in a combinator mode with static setting of different pitch and RPM. As most vessels rarely need their full engine power, and operate in varying load and weather conditions, they consistently operate with lower pitch which has been shown to be a large source of hydrodynamic energy waste. Therefore, there is a lot of potential to save fuel by letting the two parameters, pitch and RPM, be separately controlled while aiming to produce the most amount of propeller thrust for the least required amount of power. Operating in this way is also likely to improve the specific fuel consumption of the vessel’s main engine.

But how can vessel operators stop wasting energy? Addressing these sources of energy wastage is not a trivial problem to solve. However, it would require someone (or something) to keep constant track of the running parameters to ensure they get the requested result. But this is harder than it sounds, particularly when considering the man hours required to achieve this. In simple terms, doing the monitoring, constant tweaking and adjusting manually is an arduous task. What vessel operators need is for this manual task of monitoring, tweaking and optimizing propulsive power to be automated.

The development of hardware to automate the real time monitoring and control of propulsion parameters was a challenge adopted by a group of Swedish innovators with extensive experience in shipbuilding, naval architecture, propulsion and marine control system technology.

The result of research and proprietary work conducted by the group was a technology called ‘FuelOpt’, which was launched onto the market in 2012 by Gothenburg-based company Lean Marine.

Lean Marine’s FuelOpt technology is a unique control system that is installed as an addition to the existing traditional systems on-board. The technology optimizes a vessel’s performance in real time. Whenever the vessel is in transit (and using most of its power for propulsion) FuelOpt will step in and take away costly variations in speed and power due to human operational factors and optimize propulsion parameters such as pitch and RPM for maximum efficiency. The technology can be installed into any vessel during operation in just a few days and no time off-hire is required.

“FuelOpt offers owners the ability to have the cruise control system found in their cars, installed onboard their vessels.” says Lean Marine’s managing director Nicklas Karlsson. “Think of it as a very sophisticated cruise control for your vessel,” he adds.

In addition to offering sophisticated ship cruise control functionality, in the case of a controllable pitch vessel, FuelOpt also acts as a dynamic tuning system for propulsion machinery, all the time making sure it is tuned for the least possible fuel consumption. This is powerful hardware that delivers automated fuel savings.

Lean Marine’s unique product portfolio is actually based on two separate technologies. In addition to the FuelOpt technology, the company offers a data analysis tool called Fleet Analytics which allows for both verification of fuel use reduction results achieved by FuelOpt and to increase the ship owner’s knowledge of their vessel operations. Fleet Analytics incorporates a large amount of sensor data from the vessel to give user a powerful overview of the vessels situation and performance via a clear web-based interface. The system can also greatly reduce the workload for on-board personnel through offering powerful reporting functions.

“With access to all these data sources on the vessel we’re also helping the crew create very quick and powerful reports for many different purposes. Internal voyage reports and the EU mandated MRV report being two examples,” says Karlsson.

While Lean Marine may have been flying under the radar since their incorporation some six years ago, uptake of their technology has been rapid. Since 2012, Lean Marine has installed FuelOpt on nearly 100 vessels, with the milestone 100th installation due to take place during 2018.

The success to-date, Karlsson says, is due to the technology’s ability to deliver direct and tangible results of fuel saving. Not only has the company welcomed new orders of their technology, returning customers demanding fleet-wide installations have been received with increasing frequency.

Bergen-based chemical tanker owner/operators Rederiet Stenersen, have reaped fuel saving success from the FuelOpt system which was installed on across their entire fleet comprising tankers already efficient by design.

Stenersen has 15 vessels running with FuelOpt and Fleet Analytics. As the fuel optimization system is used all of the time during vessel transit, FuelOpt now has clocked up almost 4,000 days in operation across the Stenersen fleet. With a previously estimated saving potential of up to 2 tons per 24 hours, LeanMarine has, to date, helped Stenersen save in excess of 8,000 tons of fuel.

The Stenersen vessel Stenheim at berth in Vestmannaeyjar, Iceland